“My philosophy is that the kids are the stars of the show, not me.” – Jim 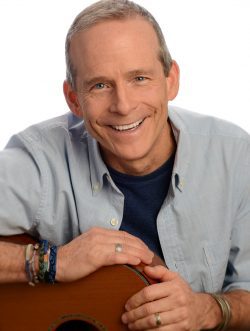 Jim Cosgrove has been rockin’ families for a quarter century! In 2023 he celebrates the 25th anniversary of the release of his first album, Bop Bop Dinosaur. Affectionately nicknamed “Mr. Stinky Feet” by his young fans following the release of his 1999 hit song Stinky Feet, Jim is a cool favorite on the concert tour circuit. He has performed more than 4,500 high-energy, interactive shows throughout North America and Europe, including two performances at The White House Easter Egg Roll.

Jim credits his family for helping him maintain the stamina throughout his career. His wife, Jeni books the shows and manages the business. Their two daughters occasionally pitch in as his road crew. Jim and Jeni co-founded Jiggle Jam, the nation’s largest independent family music festival from 2007-2013.

In addition to entertaining families and children, Jim is a inspirational speaker who energizes educators and corporate audiences on topics that include creativity, communication, and creating a joy-filled life.

Jim is the author of three children’s books based on his hit songs Bop Bop Dinosaur, Sullen Sally, and Hark! It’s Harold the Angel. He also has two books for grownups – Everybody Gets Stinky Feet, a collection of 32 essays from his time as a parenting columnist for The Kansas City Star, and Ripple, a true-crime memoir. (To learn more about Ripple, visit Jim’s author page.)